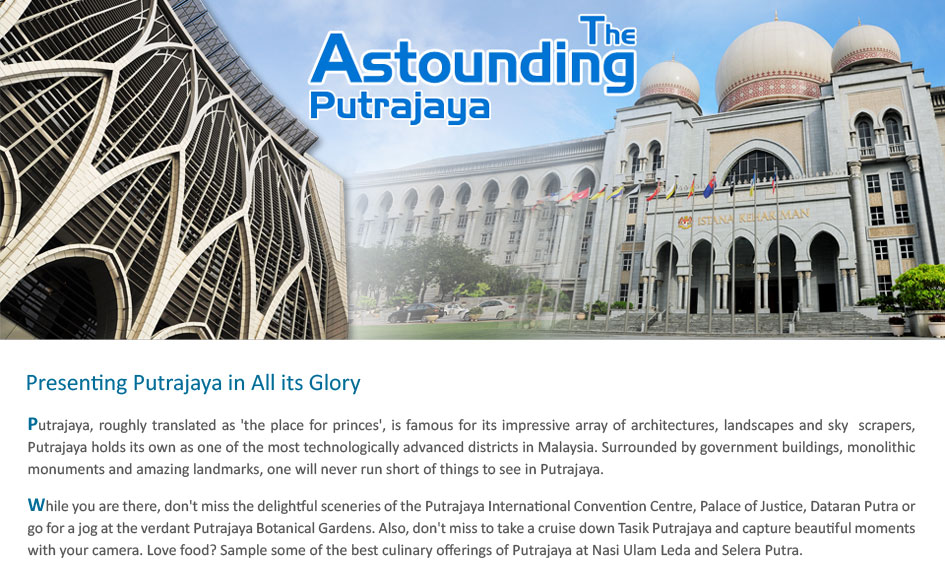 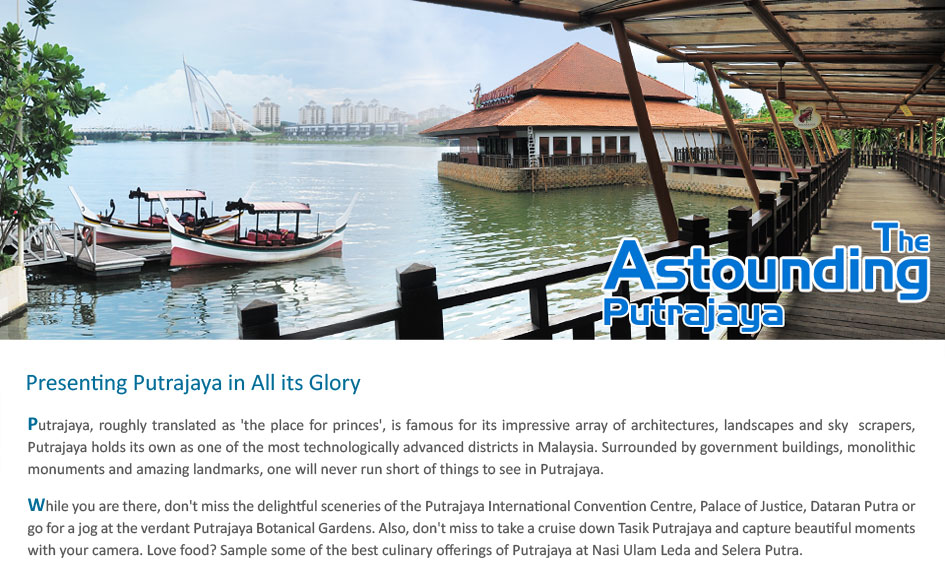 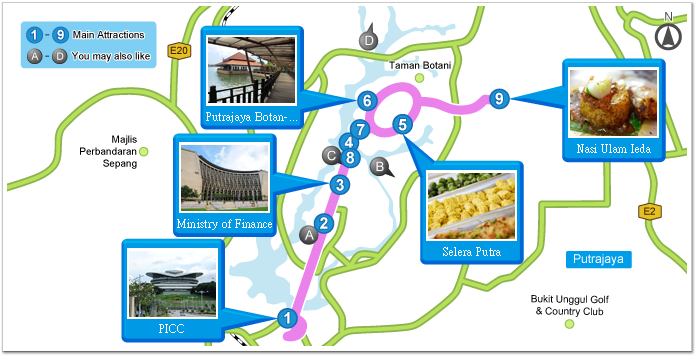 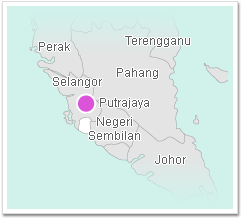 Intricately designed, the design of the convention centre's architecture combines the cultural concepts of ‘Wau’, which is traditional Malay kite, and ‘Pending Perak’, which is royal silver belt buckle. The roof of the building resembles the wings of butterfly.

The Putrajaya International Convention Centre or PICC is the main convention centre in the city of Putrajaya. Located on top of a hill, the convention centre has become a popular landmark in Putrajaya. The centre is the brainchild of the fourth Prime Minister of Malaysia, Tun Mahathir Mohamad.

If you look closely, the architecture contains a row of large pillars that signify the order of law.

The Palace of Justice, also known as Istana Kehakiman, comprises the Malaysian Court of Appeal and the Federal Court. At first sight, the classical design of the building resembles that of the Perdana Putra in Precinct 1 with large domes, which are the main attractions on this building.

The impressive textured wall of this building contains complicated yet aesthetically pleasing geometric patterns that reflect the multi-cultural aspects of Malaysia. The building also has a curved design, which makes it an attraction in itself.

The building consists of a 12-storey main block and a North and South Tower with 9 storeys. It houses various departments, including the Royal Customs and Excise Department and so on. Occupying a space of five acres, the design of the magnificent architecture is strongly influenced by Islamic cultural elements.

As the main centrepiece and town square of Putrajaya, Dataran Putra is where the Boulevard is linked to the Perdana Putra building and the Masjid Putra. Therefore, it's not suprising that it is a popular photography spot - especially with the manificent Perdana Putra and the Putra Mosque as backdrops.

A Slew of Putra Delicacy

Selera Putra food court offers a medley of international cuisine, local fares, and the ever popular fast food options such as Hameed Nasi Kandar, Secret Recipe, and so much more.

Selera Putra food court is located in Putra Square on Presint 1, Putrajaya. It sits right on the banks of the Putrajaya Lake (beside Masjid Putra). The food court has a bright and inviting ambience with its air conditioned seating and also a well-appointed outdoor section for an al-fresco experience.

A Paradise of Greens in the City

In addition to gorgeous flora, you can also enjoy sumptuous seafood meals at a seafood restaurant that is located within the park's premises after a long day at the park.

The Putrajaya Botanical Gardens is one of the must-visit attractions in Putrajaya. Spanning 230 acres, the spacious park is divided into five major areas, which are the Explorer's Trail, Canopy Bridge, Palm Hill, Sun Garden and Flora Garden. You can find an information centre at the Explorer's Trail.

The architectural design of the Putra Perdana is strongly influenced by the Zahir Mosque in Alor Setar, Kedah. It also showcases European cultures such as Palladian and Neoclassicism.

Strategically located at the centre of Putrajaya, Putra Perdana is one of Putrajaya's main landmarks and also the symbol of Malaysia's Federal Government - it houses the administrative office of the Malaysian Prime Minister. The building consists of a 6-storey main building with an East Wing and a West Wing.

Within Putrajaya, there is a 650 hectare man-made lake with surrounding wetlands that was created to beautify the city. Using a sampan or an air-conditioned cruise boat, you can relax and take in the sights of the city in just a few hours without the hassle of driving.

To avoid disappointment, do come before peak lunch hours.

Restaurant Nasi Ulam Ieda, a down-to-earth Malay restaurant serves one of the best Nasi Ayam Berempah (Spiced Chicken Rice). As you approach the restaurant, you will notice the long queue as everyone delights in picking the best part which is the crunchiest, spiced chicken. A must-try while in Putrajaya! 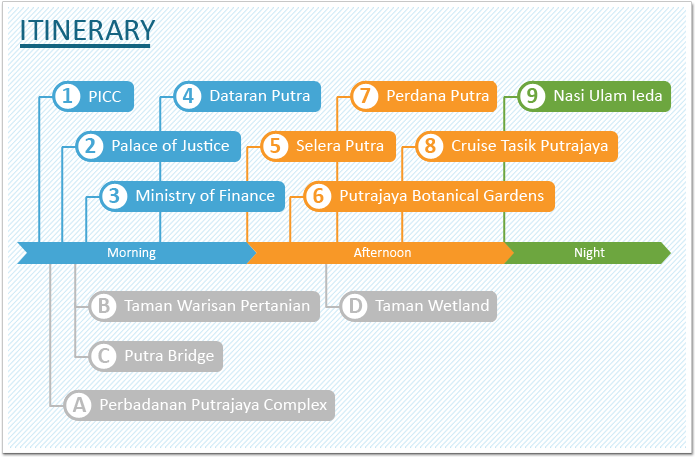